“I should wake up two hours earlier and be really productive first thing in the morning.” 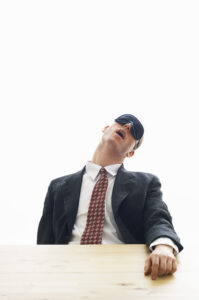 This was a conversation I had with myself pretty much every day for months. If you’ve read any book on productivity or motivation, nearly all of them talk about the benefits of waking up early and getting an early start.

First thing in the morning, I can be very productive. The problem was, waking up in the morning was something I didn’t want to do any earlier than I had to.

I’ve conditioned myself to wake up at a certain time without needing an alarm. So the thought of setting an alarm, and waking up tired, and having to deal with all that unpleasantness was kind of depressing.

I had what I call a persistent “yes, but.”

A persistent “yes, but,” is defined simply as an idea that repeatedly pops into your head that you keep responding to with “yes, but.”

You undoubtedly have at least one – if not many – of these in your own life. It may center around your business, your health, your social life, a hobby, or anything at all. There are some ideas that have been bouncing around your brain for a long time, and you keep responding to them by saying, “yes, but.”

These often start with an “I should.”

Contact Avish Now to Learn How He Can Help Make Your Next Event a Success!